Greg Mortenson – One School at a Time 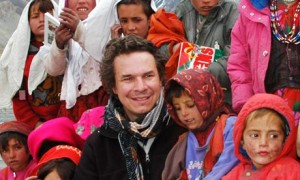 I recently read an article about the continuing miraculous efforts of Greg Mortenson. It reminded me of his book and life and example and I thought I’d share it here today.

If you haven’t heard of him, he’s most widely known as the author of “Three Cups of Tea”. A bestseller detailing his efforts to build schools in Afghanistan after being saved from some mountain villagers. He talks in the interview below about what “Three Cups of Tea” stands for and I also think it relates to a principle of life — we should seek relationship rather than destruction and the best way is through common ground, sharing and getting to know each other as human beings. He awoke, saved by those villagers and after seeing them learning outside on the dirt, using sticks for pencils and the earth for paper — he vowed to do something one school at a time.

I share with Greg the belief that if we think big but act local – we all can accomplish a lot, one student, one school at a time. We need this voice in our world, a voice of quiet action and community, a voice of investment in education (not only money, also time) and not guns and tanks….

Take a look at his blog and about CAI (Central Asia Institute) and his own work. It was an Outside magazine article that inspired me to spread his “good news” again… They have a couple of very interesting videos about Greg. Video 1 Video 2