Manga and comics in the EFL Classroom? 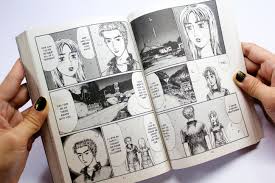 We are hardwired for the narrative aspects of language. Studies have shown how allowing students to put their learning into a story form, really increases learning substantially. Teachers have even tried it in mathematics and science! It is also the secret of Sesame street and music videos… Stories make use learn.

Krashen and others have written about how comic books can really accelerate language learning. I agree totally – anythng with a story will work. Even better if the students write/retell the stories and share….Use our folder of comic book materials for EFL teachers to use them in your own classroom. We’ve also had some excellent discussions here, do a search with “comics”. Comics folder

In today’s Korea Herald was an interesting article about “manga man”. Manga is a particular version of comics which is cultishly followed in Korea and Japan, by old and young a like. A great story about one man who reads them in the street, like the oral storytellers of old. Click here for a manga style song to share with your students. They will love it!

Maybe we can do this in our classrooms, bring manga in an English version and get our students activated! Has anyone tried? Maybe we could bring our English stories to the street even – teach the people!

TOKYO: Rikimaru Toho doesn’t mind being stared at as long as he can hold the gaze of passers-by long enough to entice them to stop and sit down for an unusual show: a comic book reading.

And stay they do, hunched on low plastic stools inches away from Rikimaru, who offers the equivalent of an animated movie for the ears, his vast vocal registry bringing to life any character, from humans to robots.

The roaring overhead train, orange street lamps and the station walls comprise the setting for his performances of manga  comics in Shimokitazawa, the cradle of Tokyo’s underground culture.

I find it appealing to do, and to offer something that one doesn’t usually experience, said the 34-year-old, whose real name is Satoshi Arikawa.

By making all kinds of voices including female ones, I enjoy watching my audience’s reactions, and I am very grateful to them, he added, with a slight bow of his head.

With long, black, dishevelled hair held in place with a rudimentary bandana, along with glasses and a black goatee, Rikimaru’s looks invite as much curiosity as his punchy voice which swings between bass and falsetto.

From action hero Kenshiro of the popular  Hokuto no Ken  series to the earless blue cat Doraemon and the lovelorn heroines of  The Rose of Versailles, Rikimaru has done them all. And that’s not everything.

Attatatata! Bang-bang-bang! Aaargh!  he shouted, shaking a  Hokuto  comic depicting a battle involving machine guns and blood. His audience, a group of college students, erupted into laughter and applauded.

When the scene changes, Rikimaru snaps his fingers and takes the deep solemn voice of a narrator.

A crowd including children and a few elderly people gathered around him, some snapping photos of the scene with their cellphones.

This is really entertaining, and especially because it’s so unusual. You don’t normally see these sorts of street performances in Tokyo. It’s so different, said a university student, 19-year-old Shohei Shindo.

For a reading of less than 10 minutes from one of the dozens of comic books displayed on the ground, listeners slip a few hundred yen equivalent to a few dollars into his box. Rikimaru politely bows and hands out chocolates.

AN ARTISTIC LEGACY: When Rikimaru was 19, around the time that Japan’s so-called bubble economy plunged into a decade-long slump, he stayed in his room for an entire year not seeing anyone, one of the country’s so-called shut-ins.

After he emerged, he held various temporary jobs. But it was manga reading that became the focus of his life and which has won him a solid fan base, evident in the regular comments on his blog.

He has appeared on television and travelled around Japan for shows, achieving a level of fame that would seem to justify the 14 years of effort he has put into training his voice and practising his reading skills.

While reading manga is one of Japan’s favourite pastimes, shared even by Prime Minister Taro Aso, it is generally a solitary activity. Popular manga cafes have cubicles so readers are undisturbed.

Through manga, however, Rikimaru says he is reviving the art of story-telling which goes back to the 11th century but has been replaced in the modern age by television, movies and now cellphones.

Historical and romance stories including the famous  Tale of Genji  were elaborately drawn on scrolls of silk or paper, known as  emakimono, and shown to the nobility. They are believed to be the origin of modern manga.

Story-telling then took the form of  kamishibai  or picture-story shows, popularised during the recessions of the 1920s and 1950s, offering unemployed men the means of earning a small income.

As Japan grew wealthy, kamishibai became romanticised as a relic of a time when the country enjoyed strong social cohesion despite common hardship.

Now Japan is again mired in recession, with thousands of people losing their jobs. And Rikimaru’s life is a sign of the grim reality many millions are facing. AFP