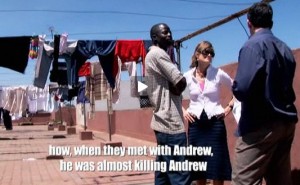 Today, I watched a CNBC episode of their new series “What the Future” (WTF).  I’ll refrain from commenting on their narrative and how they provide pleasant propaganda to the masses about helping those less fortunate. I find their message of “choice not charity” rather simplistic and self serving to their business clientele.

No, what hit me while watching the episode (about micro financing of urban poor in Nairobi) was how they used language – specifically subtitling. Every poor black person had their spoken language subtitled, even though their English was in many cases clearer than the white presenters’ /narrators’.  Go figure? I’ve noticed this before over the years. Especially how Hollywood would throw in subtitling of Asian characters, even though their fluency and pronunciation was fine. What gives?

Language IS power and I find in operation here, a certain unacknowledged linguistic colonialism. No spirit that accepts the realities of the new “Globlish” and International English that is flourishing around the world. I essence, those with power and money – the producers of these shows (like CNBC) are saying, “We speak the right English and they don’t”. Even though their English is very clear and understandable, they are using subtitles to silently and serendipitiously promote the idea that these individuals, races, peoples, cultures are “lesser” and “impure”.

Now maybe I’m taking the arguement too far but I’ll let you be the judge. Watch the episode and come to your own conclusions. Language is used as a means of power and to power. In this case, I find it all a bit too much. I wish I could produce my own episode where all the whiteys were subtitled and the Blacks, Russians, Asians weren’t.  The understanding would still be the same but the message, as McLuhan would have said, the “massage” , would have been different.