The #1 … (difficulty in being a teacher)

The participation in the creation of something which is invisible.

There are so many things that make a teacher’s life difficult. To name just a few of the thousand: noise, planning, snotty noses, mouthy kids, stuffy classrooms, things that don’t work, things that do work but are just a pain in the ass, parents that don’t care, parents that care too much, bureaucracy driving you crazy, 24/7 on your mind, marking, judging, keeping up, poor food, lousy pay, being a prisoner to the curriculum, nobody sharing, nobody caring, a clock that ticks too loud, the memory of what could be ….. need I go on?

However hard all this is – it pales in comparison to what I think makes teaching so difficult – that it is essentially, “invisible”. You are participating in the creation of something so precious, so valuable but which so few will ever notice or recognize.

Before becoming a teacher, I spent a good 8 years building things. Houses, warehouses, factories and finally skyscrapers. Loved it. Loved mostly the sense of going there and there not being anything. And then, slowly, magically, through your own sweat and blood (and yes, I bled), there was a building, walls and doors and windows and a roof. It was uplifting, it kept me going.

But imagine creating kids you can never love?

Imagine creating something that always leaves?

Imagine even worse, enriching and nurturing life that no one sees?

Yes, we are artists of the invisible. Days of sweat and toil for something we can’t see – only that which we believe. And that is so difficult.

If someone near to you doesn’t recognize how valuable and how hard working you are – print this out and have them read it. At least this piece of paper will be evidence of all that you’ve invisibly and deliciously added to the world. Print this out to show the world that you have immensely contributed.

But it is hard – participating in “the invisible”.

I remember years later, as a teacher, driving by those buildings I brought to life. I’d smile every time. One time, a giant Toy’s R’ Us factory north of Toronto, I did go inside. I went and sat in the lounge and started chatting with some of the staff who were taking their coffee break. Amid our banter, I mentioned “I’d built” this building, spread out the blueprints and from what wasn’t there, made something appear. I asked them if they ever thought about who had sweated and worked so hard to make this building. They mostly grinned and said, “No”, “Oh my god”… Then they wondered/wandered back into their own thoughts.

It was hard that. That they could not see how much the steel men had contributed – Claude, my boss’ son even cutting open his leg after falling from the scissor lift. It was hard. But not near as hard as being a teacher, always saying good bye and always having so little to show others. At least in this case – there was a building.

Can you see the hidden tiger? 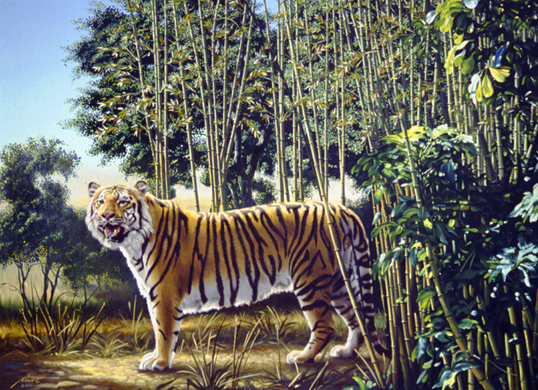