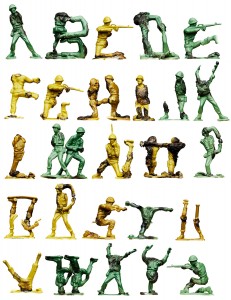 I’m in love with the alphabet! It is for me, a mine where my deep waters run still, until there is nothing left. It is the ultimate organizer, the ultimate trumpet of sound, the operating table of meaning.

My absolutely favorite thread on EFL Classroom 2.0 is the one about the alphabet. A trove of resources and presentations. However today, would like to mention another the part of the alphabet I love the most – the
Dr. Seuss part, the sound and fury part, the part that is poetic.

The Dream Life of Letters (full screen)
Years ago (see the date on the copy below), I was studying the surrealists and chanced upon “The Poetic Alphabet” by Benjamin Blood. Written in the 19th century, he illuminated and wrote in letters what I’ve always felt – that language and sound were not arbitrarily associated but rather, had an intimate connection and development. This is still a radical consideration, even a heretic thought in language circles. Language mavens stick with the party line that words as vessels of sound could mean anything – it is arbitrary and culturally decided – the relationship between the sound (word) and its meaning. Dog could mean “God” in another language.

I’m not so sure and I’m even mostly convinced as a poet, that it ain’t so. Sounds do have almost archetypical meaning to the human psyche and brain. Surveys of languages tell us it is so. Though history/time make this a sloppy and hard piece of detective work. The gutteral “U” for example – is prevalent in many languages as meaning “disgust”.

I finally, at the bottom of my many boxes, found the photocopied essay of Blood. Read and enjoy if you are a language maven. It is fascinating. If into this stuff, you’ll also enjoy my recently published – Idiot’s Dictionary. Along the same lines.

The poetic alphabet from David Deubelbeiss