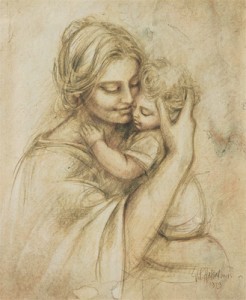 It is always a delight to read/hear one’s ideas confirmed/supported. It’s the source of so much joy and progress in this world and also the source of so much evil. Such is our nature. Today, over my Friday morning ritual of “the big breakfast” at Twiggs, the local coffee shop – had this experience.

Every Friday, I usually sit and read my New York Review of Books and enjoy an hour of “brain stretching”. This month’s issue had a sterling article “It Does Take A Village” about the incredible life and work of Susan Hrdy.

My background in anthropology coincides with my interest in language and I’ve always been interested in the topic of how human language came to be. It’s a deep riddle that holds some clues that  have a bearing on how we should teach language. If we can discover the origins of our journey, we might know where we are heading and further, based on the experiences of that journey, what makes language tick. It’s an important question that’s had its share of debate.

There are all sorts of theories about how we began this “great code” and started communicating in an abstract fashion. The “bow-wow” theory. The ding-dong theory, the pooh pooh and yo he ho theories (yep, I’m not making this up – google them!). All proposed by great scholars and arm chair grammarians. Even Chomsky is quite radical in this area, with his “asocial” and non-proto-language” theory of origins. Everyone has their own take and its been quite the place to “make your mark” in the world of social anthropology/linguistics.  I’ve always leaned toward the sing-song theory of which I’ve written about previously. Why this theory?

Well, it proposes that music and mother/child bonding are the origins of language. That the spark that led to language wasn’t fear or hunting but rather love, the love and emotion of a mother and baby. It’s a theory that puts emotion as the central impulse and fertilizer that made language grow.  So when I read the following passage this morning, I almost choked on my Canadian bacon.

And in a world where nearly half the population is male—the sex with higher levels of testosterone and its potential for causing aggressive behavior—the female majority, by better translating emotions into words, must have mitigated countless dangerous conflicts. We should not underestimate the role that may have been played by this verbally skilled, moderating majority in the evolution of language itself. Of all the calls, hoots, and screeches issued by our chimpanzee relatives, the only ones that sound a little like human speech are the coos exchanged in quiet moods by mothers with their young; the first language may have been “motherese.”

The term “motherese” is originally credited to Dean Falk (“Prelinguistic Evolution in Early Hominins: Whence Motherese?,” Behavioral and Brain Sciences , Vol. 27, No. 4 (2004).) and to me it makes sense.

Not only does the female sex today have a much better linguistic ability, it makes sense that language developed through a child, an infant. Language most certainly began through the development of “emotional intelligence” and paralinguistics (non-verbal communication). Language is an extension of that and most likely developed through imprinting on the infant of sounds that had meaning (by imprinting, I mean the process whereby infants develop ingrained behaviors regarding the mother – like a duckling will follow the “mother”.).

Language is such a powerful thing. Transcending time and power. It makes so much of what we have possible – almost everything. We owe so much to language. We might in this way – owe it all to “mothers”.

This video will get you thinking. Think a little about the children in this video and how they learn language so easily. Deb Roy’s experiment has important implications. Could it be that thousands of years of looking into a mother’s eyes and face holds the key?