I spent a large part of a wonderful day stuck in the car. Thankful, saved by a wonderful interview with Slavoj Zizek, philosopher and iconic social critic. Catch the same interview here.

What I love about him besides him irreverence (laughed like crazy when he said that 50% of the movies he’s written essays about and reviewed, he never watched!) has to be his accent. Love it! As a language lover, I love accents, embrace accents and salute accents. Not a common thing in my field where millions are spent promoting farcical “accent reduction” programs.

An accent is something we need our students to love. We should be their coach in getting them to fall in love with the way they speak a foreign language. If they think they sound sexy, they’ll certainly feel so much better about the language learning experience, be more motivated and have a brain fully loaded with dopamine and endorphines. We should compliment our students continually and encourage their love of their own voice. It will pay off lots. Play Zizek for your students and ask what they think about his accent – as a way to start this conversation.

Most will say his accent is too strong, too “je ne sais pas quoi”, too, too, too….. I find it wonderful and also great that we do take the effort, are forced to take the effort to understand him. That’s what makes language lovely, this diversity, this huzzah of sound. Stephen Fry in a well known speech decries also, our reluctance to appreciate speech, the sound of speech, the dance of words, the spray of meaning …. We love music but very seldom do we honor a speaker and his “sound”. Zizek, I honor you and want you to be a model to all my second language students.

But language is a funny beast – it is governed by the paradox of anamorphosis, here Zizek outlines it while discussing a different issue, the movie, Children Of Men.

“the paradox of anamorphosis: if you look at the thing too directly, (the oppressive social dimension), you don’t see it. You can see it in an oblique way only if it remains in the background” (Žižek 2006a: unpaginated)

I’ll leave you with that quizzical thought – you take it from there and think what I mean. I know Zizek would understand! 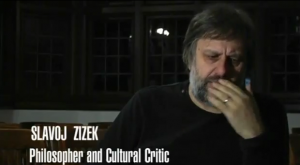