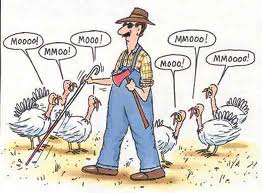 I’ve spent the weekend reading the Heidegger and a Hippo walk through those Pearly Gates, the sequel to the amazing Plato and a Platypus Walk Into A Bar. Amazing books that combine commentary with jokes.

As I’m reading, I was thinking of how jokes so well inform us teachers. So many times, jokes have framed so well, important questions that I’ve needed to ask myself so that I could be a better teach. Koestler in his Act of Creation defines jokes and especially puns as the “epitome of intelligence” and when the world that is the mind opens up and understanding results. We learn from a joke so well because it kind of short circuits our brain through two clashing ideas. Out of those two opposites is created something new – our understanding.

So today, I’m asking fellow teachers to tell a joke that really says something to them about either language, teaching or learning. A few words in explanation of the joke welcomed. Here’s my own offering from today’s reading.

What this speaks to me:

Language is so so so personal. We all have our internal logic and how we order it and arrive at its “meaning” and structure. We call this an interlanguage in second language learning. A language all our own, our own way of organizing the “sound and fury”.  Teachers have to consider this and also consider the other side of this – just maybe the student had a lucky guess!  We have to sometimes look beyond the answer and at something more important, how students arrived at the answer and higher up Bloom’s into process and analysis.

Further, this jokes speaks to the fact that students needn’t know how they know what they know. Language is acquired very unconsciously and the student may indeed be perfectly competent in retelling a story using the simple past but be totally unable to explain how they formed the right  /ed/ endings.

One last joke to share but no explanation given – I’ll let you tell us what it might mean.

A man and woman enroll in a Chinese language course.

Their instructor begins the first lesson by asking them , “Are you planning on traveling to China?”

They explain, “No, we just adopted a baby Chinese girl. When she gets older and begins speaking, we want to be able to understand what she is saying.”