Stories From The Trenches 2 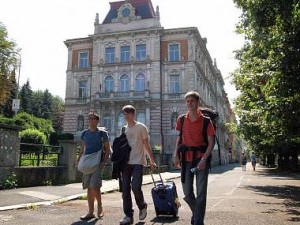 I had the luck to start teaching English at a school where I basically had free reign to teach as I saw fit.  It was just after the fall of communism in the Czech Republic (then still Czechoslovakia), a beautiful spa city, Karlovy Vary.

I taught mornings at Zkladni Skola Jana Palocha and then in the evenings at The English Center – in a class, in the same big, brick school (our class windows in the top floor of the photo).   I touched upon this time briefly in this post – Then and Now.

It was a challenge just being tossed into a classroom without much support of any kind. Fresh out of  teachers’ college, idealistic and energetic, I hit my stride given the opportunity to be in front of eager, intelligent students and the freedom to teach.

One class was a real challenge.  They were a group of 13-14 year olds who spent most of class giggling and playing jokes on each other.  I had to make a pact with them – if they buckled down and got their work done and our agenda completed – they could play games for the time remaining.  A typical teacher tactic!

One day, the boys had plenty of time to play games. All of the boys were eagerly playing a discussion board game – eager to test each other and get their competitive juices flowing.  I was glad that I could have some highly cherished “down time”.

However, one young boy who was also the quietest, the not so bright one and biggest troublemaker wasn’t joining in. He just sat there slumped over his desk, head down.  I went over to him to find out why he wasn’t playing and ask what was up.

When I asked, he just looked up at me, rolled his eyes and said – “Teacher. This is bored game.”   And I looked deep into his eyes and I knew  that he knew that I knew, what he meant.  He was making a pun, using language in the highest order. Wow!  It wasn’t a mistake but pure second language gold and poetry.

I didn’t challenge him further and was smiling for the rest of the class as he remained slumped at his desk.

1.  Don’t assume student fluency is low just because they aren’t speaking a lot.  There is a lot they are learning, a lot ticking on inside their brains even though we teachers might assume they’ve shut off.

2. Language ability  is not directly linked to intelligence. In fact, intelligence and being a star student might be detrimental to ones success as a language learner. (think of how so many Harvard students fail their language requirement – more about this here. ).  Just because one is intelligent and does well in school, does not automatically mean that this student will be a great language learner. Language is not just about the brain’s processing power (intelligence in its gross form) but also about so many other things.

I remember fondly the years I spent in the then, dirty, coal dusted, Cinderella in waiting town of Karlovy Vary. I fondly remember this one boy who in one little statement helped me learn so much.