Not just playing a part 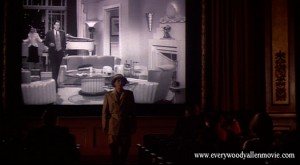 I’ve been working on a new post this weekend, a reflection on my own development as a teacher and all the footprints that truly led me to where I am right now. Something for myself but which other teachers might find some truth therein.

I’m not even near finished, so many footprints, so many seminal events that one after another pointed me to the here and now. But I’ll share one of the them and how it set me off towards an understanding that we teachers need to know when to break out of our roles, our routines, stop “playing the teacher”.

It was in the early 90s and I was in the storied, most beautiful movie theatre in Toronto, the Runnymede. It was way past its hay day but still could make any movie special. I was watching a movie I’d missed years before when it appeared, “The Purple Rose Of Cairo” – one of Woody Allen’s most treasured films.

There is a scene where Baxter who is playing the lead actor in the film, spots Cecilia in the audience. She’s been coming to watch this same movie for weeks. He literally “walks out of the movie” and into reality. The scene has always stayed with me and listen to Woody Allen explain it in the video below.

In the days that followed, I thought and thought about the scene and it really hit me hard as a teacher. I realized I’d been sleepwalking through things. Playing the part. Handing out worksheets, ticking off boxes, giving homework and smiling and nodding and punishing like a teacher. I wasn’t real. From those days on, I began to awake as a teacher, to keep slapping myself and keeping things real in my classes. I started to have a compass within myself that told me when I was just playing a part and that I needed to “walk out of the dream and into reality”.

Thank you Purple Rose of Cairo and Woody Allen. One of those footprints that I walked in and which pointed me to where I am.