You don’t have to have a RAM truck to serve ….. 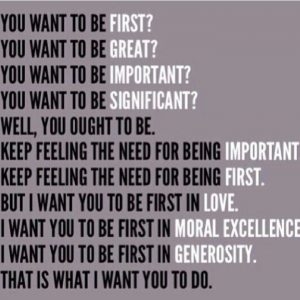 One of my all time favorite sermons of MLK Jr. has been his – Drum Major Instinct. It speaks to us and especially teachers, on a very fundamental and deep level.

If teachers do anything, they serve. That’s where it all starts. Not saying a paycheck doesn’t count – wonderful! Not saying, summer vacations don’t matter – wonderful! What I am saying is that teachers garner respect because they do what so many don’t – they serve. We are servants.

So last night I’m watching the “super” Superbowl with friends, my weekly NFL pool pugs. We are a motley but great bunch of guys (and a few gals). So much fun. But then to my wondrous eyes did appear – a RAM Truck commercial using MLK Jr.’s sermon as a call to action – as a call to buy RAM trucks (and so to serve). I’m sorry but you don’t have to buy or have a RAM truck to serve …..  Others do agree.

Disgusted me. Truly, madly, deeply. Are we living in Oceania and communicating in Newspeak? Watch the commercial for yourself. Then watch the original below, alone, and contemplate the message and meaning.

Fortunately, I see a teachable moment and an opportunity here. A good lesson about media literacy and the “slick willy” nature of ad agencies and by default corporate America (world). Get students thinking critically about this commercial. Use the Commercial Analysis sheet contained in this ebook on Using Commercials In the Classroom.

Also play the speech first to students – the raw recording. Here is the transcript. Students can practice the rhythm of language by simply saying “Amen” after each statement. Ask students for the message, what it is practically saying about how they should live. Then contrast with the commercial – what is the message of the commercial? How is this different from the original message MLK Jr. sought to convey. You might even ask students to listen to the whole sermon (about 38 minutes in its entirety). How does MLK Jr’s beliefs contrast with the message and beliefs of the commercial and Dodge – the maker of RAM trucks?

But the bigger lesson objective teacher or student is to stop and think about the messages in the world around us. Don’t be duped. Doubt everything or as Voltaire put it – Ecrasez l’infame. Fight the infamy. If teaching is about anything, it is about working towards a better world – being a servant to that notion. I’m not talking about a a particular educational philosophy (like social reconstructionism). This goes way beyond the debate over what education is all about. It goes to the heart of why we are here for our short time on this planet. Like MLK Jr, I believe it is to serve.