The Changing Role Of The “Foreign” English Teacher 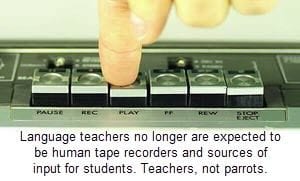 A story to begin.  For a good number of years I worked at a large teacher training institute in Korea. For the largest school board in the world. We were responsible for training both Korean and foreign English teachers. I had a lot of opportunities to see classrooms in action and discuss issues with teachers.  One that so often came up was the dysfunctional nature of the co-teaching relationship between Korean and foreign teachers assigned to teach together.

In many instances (not all), foreign teachers were used as “model” speakers and a source of language input just like you would a video, a CD, a cassette tape player (yeah, I’m that old).  The Korean would turn to the foreign teacher (from Canada, USA, Australia, S.Africa, New Zealand, England only – that’s another issue for another blog post) when she or he needed the language to be modeled.  The foreign teacher would read the text or act out the dialogue. Then the Korean teacher would take over the class again.

This was common.  But very dysfunctional. It led to a lot of resentment.  The foreign teacher totally dis-empowered and meant to be a machine that could be turned on and off.  The Korean teacher asserting that this was why the foreign teacher was there in the first place – to model the language as it “should” be spoken.

I relate this because it still happens in many parts of the world. Further, even if it doesn’t – the belief in the “native speaker” model and voices from Canada, USA, Australia, S.Africa, New Zealand, England only being the source of target input still persists. Widely persists.  And it’s wrong. Let me tell you why.

I will be commenting on this further in the coming weeks. Next post will be about the myths we’ve created and saliently believe and live by and which perpetuate the native speaking model (as it relates to teaching). Stay tuned.

Stay awake. Stay aware. Be transparent and call things as they are. The days of the native speaker carte blanche entitlement  are over.