A Wig or a Hat

A teacher wears many hats, so why not actually wear one?

Especially for a language teacher, it is imperative to decrease student anxiety, lower the students’ “affective filter” *. We need to be “performers” as well as excellent psychologists and “doctors of human motivation”. We need to master the ability to manage class mood and to get students to “be” light but still connected with the learning happening in the classroom. 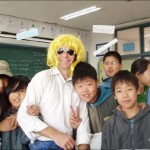 There is no better way I’ve found than using a wig or a hat. Putting on a wig or a hat helps in two main ways: 1. You become another teacher, it gives you a new identity and you can teach differently and stretch your limits, test out new methods and manners of being in the classroom. 2. Your relationship with the students changes, it lightens, the class becomes less heavy and more a place the students want to be.

I first used wigs and hats when teaching young learners and when storytelling. It was a way of indicating it was a time to hit the carpet and read our storybook. But then I extended its use to times when levity was needed, when the class mood had sunk. I started using it to be another and tell stories or act like another teacher. Eventually, I even allowed students to wear it as a reward, as a way they could have an alter ego. There are just so many ways, a wig or a hat is valuable in the classroom. And it is convenient, takes one second to do and bingo! – like magic, the learning environment is transformed.

One of the most memorable moments I had as a teacher trainer and evaluator was watching a teacher’s class when she was getting students to perform short role plays she’d ask them to prepare. As the students came to the front of the class, she pulled out a big box and students could choose a hat to wear during their performance. It instantly lightened the students’ anxiety and really helped them produce and learn the role play dialog language. It was magic!

Try it, you’ll be amazed at how your classroom will be transformed.

* The affective filter is an impediment to learning or acquisition caused by negative emotional (“affective”) responses to one’s environment. It is a hypothesis of second language acquisition theory, and a field of interest in educational psychology.

According to the affective filter hypothesis, certain emotions, such as anxiety, self-doubt, and mere boredom interfere with the process of acquiring a second language. They function as a filter between the speaker and the listener that reduces the amount of language input the listener is able to understand. These negative emotions prevent efficient processing of the language input.[6] The hypothesis further states that the blockage can be reduced by sparking interest, providing low anxiety environments and bolstering the learner’s self-esteem.
According to Krashen (1982)[7], there are two prime issues that prevent the lowering of the affective filter. The first is not allowing for a silent period (expecting the student to speak before they have received an adequate amount of comprehensible input according to their individual needs). The second is correcting their errors too early-on in the process.

Since Stephen Krashen first proposed this hypothesis in the 1970s, a considerable amount of research has been done to test its claims. While the weight of that research is still not definitive, the hypothesis has gained increasing support.

Krashen was not the first to suggest this hypothesis. Dulay and Burt were in 1977, and Krashen made it famous in 1982. This is stated by Krashen himself on page 31 of his book on second language acquisition (1982). Source: Wikipedia